I guess I've known Monster Bobby for about 10 years, since he kindly asked me to play some songs at the "Totally Bored" club he was helping to run at the time, and we've kept in touch ever since. I've always found him never less than utterly charming and I've always admired his total love of pop music and the way it works, whilst clearly keeping interests in music some may consider a bit more "cerebral". He talks about his music in the replies, so I'll just point out that as well as being something of a mover and shaker and active collaborator in music, he also produces two rather fine and engaging blogs The Bomb Party and Little Other...

Well, on my birth certificate it says Robert William Barry, however most people have called me Bobby for as long as I can remember. But then, Bobby Barry is obviously far too ridiculous a name to do anything vaguely professional under, so about ten years ago, I started adopting the even more ridiculous moniker of Monster Bobby for most of my musical projects.

Paris, these days, however I grew up in Brighton and lived in London for the best part of ten years before moving here.


What instruments do you play?

Guitar, mostly, although I also have a small collection of old Casio keyboards. I've been both a percussionist and an electronics/weird noises type person in bands before.

Well, there's a few... First and foremost, there's The Pipettes, the pop group I started about seven and a half years ago that has now released two albums and many singles. In The Pipettes, I play guitar and a sort of electronic harp/guitar thing called a Q-Chord, and occasional I trigger samples. Everyone in the band writes the songs.

Then there's the solo thing I do, Monster Bobby, which is generally me with an acoustic guitar and a sampler, singing songs with occasionally quite obstreperous electronic noises behind them.

Last year, I started a project in London called A Little Orchestra, which is a sort of loose collective of instrumentalists, generally orchestral instrumentalists, performing a mixture of 20th century minimalist/avant-garde works, film scores, pop songs, and our own compositions.

Finally, I just invented this game called Wav Tennis, whereby any two musicians or non-musicians volley sound files back and forth over the internet, gradually building up tracks through the semi-random accumulation of exchanged noises. You can find more details of the rules to Wav Tennis on my Little Other blog. I am currently engaged in a couple of games of that, and always up for starting new sets. Hopefully, one day, everyone will be playing Wav Tennis!

A thing on RER called Baku: Symphony of Sirens, which is a double cd compilation of recordings and reconstructions of music/poetry/sound art from Russia in the immediate post-revolutionary period.

Two things towards the beginning of last year - Cosi Fan Tutte at the Royal Opera House, and Billy Budd at Opera Bastille - have left me obsessed with the possibilities of sung drama.

I think pretty well all the live music venues I have ever loved are now either closed down or refurbished beyond recognition.

The Pipettes once played a gig in a hair salon in Berlin that was sort of like something out of an Armistead Maupin book. That was quite strange.

You know that thing that happens sometimes when everyone in the band plays the wrong thing - but you all play the wrong thing together, and it ends up sounding/feeling much better than the right thing ever could've done.

I get very jealous of musicians who are very comfortable improvisers because I have a sort of crippling fear of being on a stage and not knowing what I'm supposed to be doing. And I find small stages in front of small amounts of people much scarier than big stages in front of large amounts of people, and therefore no stage at all in front of four or five people can be absolutely terrifying. Having said that, over the years, I've always found ways and means of bringing forms of group improvisation into my life, although rarely in public. The Pipettes have always spent a lot of time improvising in rehearsals, often in styles that one would not expect from a band like The Pipettes; and A Little Orchestra play quite a lot of stuff that is improvisatory but structured in some (possibly quite meagre) way, such as by a piece of text. I briefly had a project with a guy who makes sort of noise music and super 8 films who calls himself Eaten By Children, and that was all based around improvisation, largely with no-input mixing boards and fx. We made some pretty nice recordings which sadly still haven't been released, but I hope they will be one day. All these things were definitely, as you say, important to me, and some of my favourite live gigs by other people have been improvised or at least contained improvised elements, but right now, at least, it isn't really something I do in public.

I'd like to split this question into two halves because I can't think of three people that I'm willing to unambiguously call "Heroes" with a big capital H. So, on the one hand, there are people who might better be called "Anti-Heroes": people where the absolute amazingness of certain aspects of their work/life has sort of been overshadowed by the utter wretched sordidness of certain other aspects of their work/life, in which category I might put, Richard Wagner, Michael Jackson and Phil Spector. On the other hand, there are people who are perhaps less reprehensible, but also somehow less heroic with a big capital H, and yet somehow they've maybe done a bunch of stuff that I really think, gee, I wish I could say that I'd done that. I'd like to call this category, less "Heroes" than "Pretty Cool Guys" and I would include there people like, Laurie Anderson, Bill Drummond, Delia Derbyshire, Raymond Scott, and Glenn Gould.

That's sort of a tricky one, in a way. Probably six months ago I would have said London without really thinking about it, but now I'm living in Paris and I'm really much happier here than I ever was in London. Then, at the same time, I have a certain resistance to naming Paris as my, like, "favourite city in the world" much as I find it a very pleasant place to spend my time. There are also a number of cities that I haven't spent that much time in but I've been enormously impressed with while there, and have always felt like I'd like to spend much more time there: Copenhagen, Bologna, Osaka, Hamburg, and Berlin, in particular. Probably my favourite city would have to be some imaginary city, like Ledom in Theodore Sturgeon's novel Venus Plus X, or something like that.

At the moment, probably Dr Faustus by Thomas Mann, and The Stars, My Destination by Alfred Bester.

A couple of favourite films

Recently I decided that the five best films ever made are Modern Times, City Lights, The Kid, The Gold Rush, and Buster Keaton's Sherlock Jr, and that anyone who says otherwise is just wrong.

Far too many to mention. 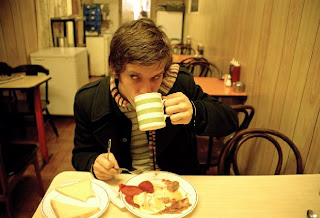 The Music Questionnaires are an ongoing series
at 9:10 pm