Graham Halliwell is a saxophonist, whose work has recently been exploring
ideas of stillness and sparseness, to this end he has been supplementing
its normal sound by utilising it as a device for shaping feedback. This
has lead him to work with some of major names in the "reductionist" or
"lower case" school. He plays in the brilliant trio +minus with Bernhard
Gunter and Mark Wastell, and has recorded with Rhodri Davies and Steve
Roden. Other groups include VHF (with Simon H Fell and Simon Vincent).
His CD "Recorded Delivery" has been very well
received.

"Stone Circles" by Bernhard Gunter - I have been commisioned to do a
remix - so I've been listening to it today.

Judas Priest at Wigan Casino in 1976. It made my ears ring for days,
and I got off with a rather beatiful person called Gill who came from
Wigan and believe it or not wore clogs!! (well it was the 70's). The
love affair lasted for one week. I hated Judas Priest by the
way........far too loud and pompous (but what a week!!).

Liverpool Stadium in the mid 70's. The rock gigs I saw there in "my
youth" (Gong, Henry Cow, Faust, Hatfield, Van der Graaf etc) always
sounded great and the atmosphere was superb - bordering on the surreal.

The Club Room!! Come on Richard - you know it was strange!!

Every saxophonist's nightmare - you pick up your sax and are about to
play intense quiet music and the reed has broken and is unplayable since
you last put the instrument down. This happened to me at a VHF gig at
the Red Rose in the late '99. Never been back since.

Performing a duo for live feedback sax with Rhodri Davies playing ebow
harp in Norwich 2003. Everything was perfect and beautiful for a whole
12 minutes. Creating sounds that the inventors of both instruments
would never have dreamed of (and probably wouldn't condone).

Yes - but only as important as anything that can also be called
composition.

Ulysses by James Joyce and almost anything by P.G. Wodehouse.

Caravaggio by Derek Jarman and anything by Tarkovsky

My wife! and P.G Wodehouse and absurdity in general

Is there a pop song you feel sentimental about, and can you name
it? 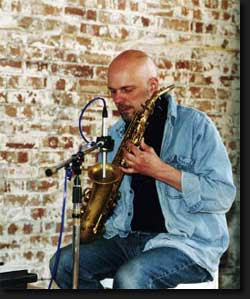 Thanks Graham
the music questionnaires are an ongoing series
at 8:23 pm