Brian Inglis is musician whose work falls into two very distinct camps. He is classical composer whose recent projects demonstrate a prevailing
interest in connecting ancient spiritual themes with present-day concerns (both "Peace" and "Invocation" combine texts drawn from Islamic Sufi mysticism with those from Eastern and Western Christian
traditions).

His other hat is as a member of the rock group Hicks Milligan-Prophecy, The band has recently been seen supporting The Fall, and their jerky, sarcastic and at times hysterical take on "rock music" is destined for great things.

Brian Andrew Inglis. I'm sometimes known as Dr 'Fingers' Inglis
by my musician colleagues in Hicks Milligan-Prophecy and the Zoltan
Kodaly School for Girls. I am a real doctor! though not a medical one.

All kinds of keyboard instruments from piano to Casio keyboard.
Also tuned percussion and a little theremin.

I recently had a concert performance in London of chamber songs
setting poems by the medieval mystic Hildegard of Bingen. But my main
ongoing project at the moment is the band Hicks Milligan-Prophecy - our
first single is being released this autumn.

Beethoven: Symphony No 5 recorded by (I think) Karl Boehm and
the Vienna Philharmonic Orchestra. It was the first 'proper' classical
record I got (part of a series sold with a magazine in the newsagents)
when I was about 12 and it opened up the whole world of classical music
for me.

1 'Lil' Beethoven' (Sparks) - an absolutely inspired
fusion of classical and popular music by a band who are very underrated
in the UK being known by most people only for 'This Town Ain't Big
Enough For Both Of Us'.

2 'The Age of Plastic' (Buggles) - again the Buggles are
very underrated being known only for 'Video Killed The Radio Star'. All
the tracks on this album are great especially 'Elstree' and the sound is
very prescient.

3 'The Veil of the Temple' (John Tavener) - I went to the
all-night live premiere of the full-length verson of this work (lasting
7 hours!) in 2003. It was a transformative experience, the music is
probably the best Tavener has ever done and the combination of religious
texts from Christian, Hindu and Islamic Sufi sources is very relevant
now.

A performance of Francis Poulenc's opera 'Dialogues of the
Carmelites' at the Guildhall School of Music and Drama 10 years ago or
so. The opera is set in a convent during the French revolution and the
final scene shows the nuns being guillotined one by one. They sing
prayers as they approach the scaffold so you hear the strong voices in
the nuns' chorus gradually reduce as they are executed until only a solo
voice is left which is cut off in the middle of a phrase. A crowd of
townspeople watch this and the production had them start out by jeering,
mocking and spitting at the nuns. Gradually however the crowd became
emotionally affected by the nuns' dignity in the face of public
humiliation and death, and by the end they were turned away in horror
and shame, tears streaming down their faces. It was incredibly powerful
and well performed and I was stunned by it, almost paralysed rigid in my
seat.

The Royal Albert Hall is a great place for concerts and it seems
to work well for both classical and popular music.

Probably at a garden party on the outskirts of Gothenberg in
Sweden. It was pouring with rain and we were playing in a marquee, near
the beginning of the set my keyboard stand collapsed and the keyboard
crashed to the floor. The band just kept playing so I had to continue
sitting cross-legged on the floor; a couple of members of the audience
tried to help me lift up the keyboard and stand during short interludes
in the song where I wasn't playing - but they were never long enough!

Playing WKD (Camden) in August 2003. It was boiling hot and
everything seemed to go wrong from the keyboard falling off its stand (I
seem worryingly prone to this - see above) to the guitar going out of
tune. It was one of those moments where you just wish the earth would
swallow you up.

I Karlekens Namn (Love Festival), Norberg, Sweden, August 2004.
We were near-headlining the festival, playing in a fantstic barn venue
and the crowd of beautiful, interesting people went wild for us. It was
such fun! The pear cider was great too.

I used to be in a free improvisation group in Durham when I was
at university. It's still important to me as a means of generating
ideas/material (I started off composing in my teens just by making stuff
up at the piano before trying to write it down) though less so as a
means of performance. Most of the songs we write in Hicks
Milligan-Prophecy start off as group jams, also I provided the
incidental music to a play in this way a couple of years ago with a
singer friend.

I love London, Paris and New York, though my favourite would
have to be Paris as it's the most beautiful, cultured and stylish.

I love anything by Anita Brookner, especially 'Falling Slowly' -
the sheer quality of the prose make her books a joy to read, and such
bittersweet tales she tells. Also 'Foucault's Pendulum' by Umberto Eco -
it covers a lot of the ground popularised by Dan Brown's 'Da Vinci Code'
but much more besides and is far better written.

I love Carry On films. I watched 'Carry On Captain' on TV once
and laughed virtually all the way through.

At the moment I'm addicted to Youtube. There's a video made for
a competition of a Divine Comedy song performed by Muppets which is
sheer genius.

Is there a pop song you feel sentimental about, and can you
name it?

'Red Letter Day' by the Pet Shop Boys. It's about the
pointlessness of life without love and a plea for a world in which
people are allowed to be themselves, treated equally and not judged by
their sexuality. And I think that's a good thing to be sentimental
about. 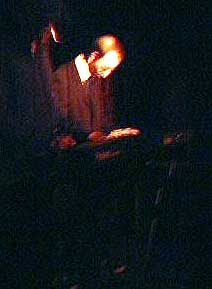 Thanks Brian
The music questionnaires are an ongoing series.
at 8:36 pm