I can't quite remember the circumstances in which I met Liam Stefani, I think it started with a phone call some 13 or so years ago (before we used email and all that) when Liam contacted me to ask Ticklish to play a gig in Glasgow, which ended up being our first foray away from home turf. I've since met him a couple more times when I've been up to Glasgow to play. Then, as is the 21st century way, we remade contact via Facebook, where I've become aware of the extraordinary electronic music he's been making - editing and re-arranging field recordings and snippets of various instruments. As self-effacing as he is enthusiastic, I had a feeling Liam would come up with some interesting answers, both as a producer of music and a promoter....

Aside from cassettes made by listening to John Peel, Charles Fox (Jazz Today), Music in our Time & the 'Electronic Voice' series (radio3)...

The 7LP Deutsche Grammophon boxset of Stockhausen's "Aus den Seiben Tagen" (repeatedly borrowed from Newington library in Edinburgh during the late 1970s... transferred onto cassettes) was a definite influence and encouraged a curiosity in improvisation... which led to Incus Records and beyond via sections of "Music Outside: Contemporary Jazz in Britain" published 1973, by Latimer New Dimensions. ISBN 0-901539-25-2) by Ian Carr

As purchases, most recently, a couple of cds picked up in paris; a harsh noise wall cd by french artist VOMIR (like examining a piece of slate, carefully, for 20+minutes) and a real joy of a 2CD compilation by David Toop called 'Not Necessarily "English Music"' which is a collection of (largely previously unreleased) experimental music from Great Britain 1960-1977...by post, a couple of discs of psycho-surreal, feral music featuring RITUALISTIC SCHOOL OF ERRORS which is a project by the fine chicago-based artist gregory jacobsen

(selfishly), Derek Bailey "drop me off at 96th" is still, I think, my favourite Derek on cd.
It's a cd of two different sets of pieces; I fell in love with the first set (referencing a history in his playing, with personal tributes to past musicians) when i first heard them in the late 1980s; I always wanted to release them and was delighted when Derek said "yes", then proceeded to gift another set of pieces (minimal, elegant modernist; complete contrast) to complete the release.

I do have problems recommending music; it's normally a spontaneous response, often relating to a current conversation or particular interaction

There are lots of musicians i'd like to hear more of... (I guess that's why I wanted to run a label)

But, specific people are attracted to specific genres; I can't think of many records I think 'everyone' should hear.

Many... hearing Andres Segovia, watching Pina Bausch in 'cafe muller', Beckett festival (films and plays), all at the Edinburgh Festival; the butoh performance which came annually during the 1980/90s Mayfests in Glasgow,..

No real favourite. I think any venue can be good for someone... depends on space, sound, crowd, presentation...

What's the strangest place you have performed live?

Tell me about a great experience as a performer

I dislike my personal spectacle... my ideal would be a collision of sound and image without the physical presence (not achieved, as yet)

I enjoy generating the setting, making oblique preparations, and being unable to predict what the end result will be...

There are many people whose work I admire... stuart brisley harold pinter, elfriede jelinek

(recently), "Thelonious Monk, An american original" by R DG Kelley; "how late it was, how late" by James Kelman 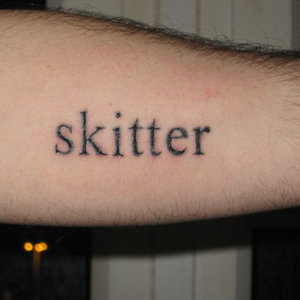 The Music Questionnaires are an ongoing series
at 10:52 am