I got to know Chris Cundy in the mid 90's when he he used to play at "The Club Room", the improvised music club I ran. Later his band "Transmissions of Not" played at my "Baggage Reclaim" club. He's consequently become a mainstay of the UK free improv scene whilst also being a member of The Guillemots and even found time to appear on my EP "Pinhole" a few years back. A tremendously enthusiastic individual, he could justifiably be described as putting Cheltenham on the experimental music map, both as a player and as a promotor...

My name is Chris Cundy

A new band called Exit Kit. It's a quartet I've put together so that I can play my own music.

Name a record that had a big impact on you in your youth?

Seeing The Auntie Vegetable's performance at a house party in Chatham when I was about 10 and realizing that growing up wasn't entirely necessary.

On the street, any street - busking. The people I meet and the reactions people have are wilder than anything I've seen on tour or in the comfort of a venue.

Working with Mexican dancer Tania Cervantes for Nofit State Circus. I helped create/perform music for an aerial fight scene that she devised just by counterweight that spanned the height of the big top. It gave me very free and edgy possibilities for the saxophone which I played over a toe tapping 6/4/3 rhythm.

Yes, I should think its possibly the most important thing to me.

Willy Wonka And The Chocolate Factory (the original of course) / Back To The Future.

Ivor Kallin and Alan Wilkinson getting up to mischief together.

Yes, I suppose it would have to be To Love Somebody by The Bee Gees. Funny, I never really liked the Bee Gees but what a song that one is! It is about loss and absence isn't it? It conjures a spooky kind of nostalgia in me anyway. 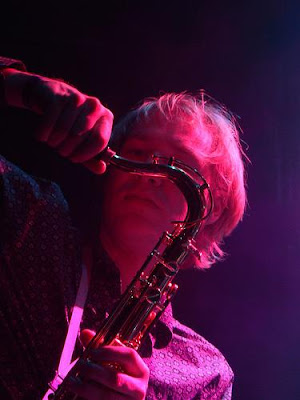 The Music Questionnaires are an ongoing series
at 8:17 pm