Back at the turn of the seventies, just as post-punk was turning into new pop, I used to hear a band called The Chefs on John Peel a lot, then in the early 80s I used to hear sessions and records by a group called "Helen and the Horns" who I really liked, they had an unusual (if accurately described) line-up of a girl on electric guitar and vocals, and a brass section. Helen was Helen McCookerybook who used to be in The Chefs. Fast foward about 6 years and I catch Helen and the Horns quite by chance in a London pub, after I moved down here to be a student...and I was entranced again. Then years later Steve Beresford put us in touch and I was able to give Helen a gig at Scaledown, and discovered she still writes beautiful, jazzy songs and still has a lovely guitar. Now it turns out she also collaborates with Jude Cowan, who I'm in a band with...isn't the world wonderful?
So why not listen to some of her music, read her splendid blog or check out her art?

I am Helen McCookerybook, musician and artist; Helen Reddington, academic and writer, and Helen McCallum, daughter of McMum and McDad.

In High Barnet, flower of the north or weed of the south, whichever way you are looking at it.

Guitar, Logic Audio and vocals. Some piano, some bass, some banjo; used to play 'Oh Susannah' on fiddle when drunk.

Three of them: recording an album of songs with Martin Stephenson; preparing a compilation of back-catalogue of The Chefs' music for release; writing a song with a group of cleaners who have formed a complaints choir to express their frustration with their employers.

Whipcrackaway by Doris Day. I remember my mum's friend Pam singing along to it on the radio at the top of her voice as she beat the eggs for scrambled eggs at breakfast time.

The last Slits gig I saw in Islington in the summer of 2010. Just a few months later Ari was dead, but at that gig she was the most alive person in the Universe.

Of all time, the Moonlight Club in West Hampstead. Of now, the Cluny in Byker.

An allotment in Stockport one freezing August, where Adrian the gardener had grown a stage from banana trees and pink and orange dahlias. It was breathtakingly beautiful, and the fee was jam, chutney and flowers.

My punk band Joby and the Hooligans took our instruments up to Sussex University when Johnny Thunders and the Heartbreakers were playing, and begged their manager to let us play some songs at the start of the evening; we loved them so. He said no, so we got exceedingly drunk because we were so disappointed. He changed his mind, and when we got on stage I couldn't even see the neck of my guitar, let alone work out how to join in with the others, and nor could they work out how to join in with me.

They pulled the plugs on us.

I wish it was. Because I can't do it (I lack the rudiments of musical knowledge to rebel against) I sit and draw the people playing, which helps me to enjoy what I hear even more.

Desmond Tutu, my now deceased and very badly-behaved cat Charlie who ate the family clothes, and my American Grandma who was a flapper and danced on the piano in the 1920s.

San Francisco. I have never been there in real life but I have a lot in my imagination and I love it there.

Mostly, Martin Stephenson at his live gigs, but also Stanley Unwin and The Simpsons (how have they managed to stay funny for so long?)

Street Life by The Crusaders at the moment. I used to live alone in Brighton with lots of rescued caged birds, and I used to get back from a night out and dance around the flat to that track, with the budgie gripping on to the top of my head for dear life and flapping his wings.
Happy times! 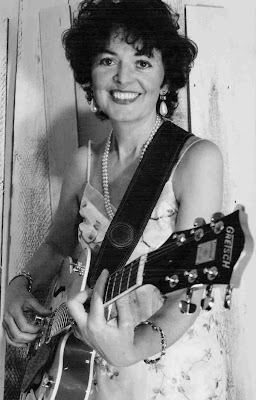 Thanks Helen!
(Photo by Jacob Stevens)

The Music Questionnaires are an ongoing series
at 8:12 pm